The last ride that Andy, Thomas, James and Uncle Mike went on at Walt Disney Studios was Crush's Coaster, based on the film 'Finding Nemo'. You get to whizz around a blacked-out track, in a turtle-shaped rollercoaster car, which twirls and spins as you soar and dip your way through the 'sea'.

Or, at least that's what usually happens... 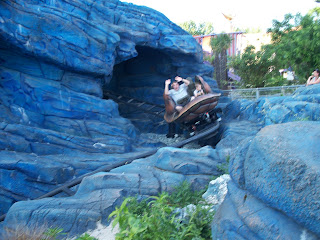 As we flew along the tracks on our final ride, the car came to a sudden and abrupt halt, which left our turtle-shell spinning wildly in the darkness for a few seconds. The lights inside the coaster canopy came on, and an announcement over the tannoy told us that the ride had malfunctioned, and we should remain in our seats. We weren't really planning on going anywhere!

The four of us were stuck in our shell for what must have been about 20 minutes, while the attendants walked their way around the ride helping each of the riders to safely escape from their cars. They got to us last, which gave us plenty of time to look around the ride track and see what it really looked like behind all of the darkness and special effects. It certainly wasn't as impressive with the lights on as it is with the lights off!

Finally, we were rescued from our shell, and took a long walk back to where the rest of the family were waiting patiently for our return.

Quite an exciting end to our holiday, and one that I'm sure we'll remember for a long time to come!