As if one 60th birthday in the family during August wasn't enough, it was Grandma's turn to hit the big 6-0 today! It's going to cost Cardiff Bus a fortune in free travel!

Grandma decided to test the foundations of her bungalow by inviting around 70 people to her party! It was bit of a squeeze, but everyone had a great time.

Here's a photo of Grandma and Grandad on the big day - they have to stand that close together, as they're both so old now that they topple over if they're not leaning against something! 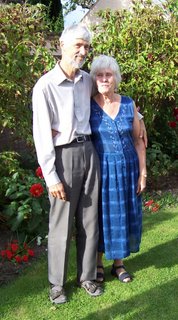 Grandma had to have two cakes for her party - a chocolate cake in the afternoon, which could be enjoyed by the grandchildren, and then a fruit cake in the evening so that Grandma had a chance to blow out some candles after the children had gone to bed! 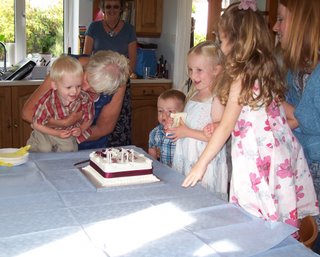